The famous Roman house known as Theseus’ mansion was located on Maloutena hill by the Polish expedition, between the Houses of Orpheus and Aeon. It is a huge building, the dimensions of which (94x 142m), make it the largest building of the late 4th century BC. in Cyprus, and one of the largest of its kind in the Mediterranean.

It was progressively built and rebuilt in the late 4th century, incorporating older buildings in the area, the oldest of which date back to the Hellenistic period. It was a very luxurious house decorated with frescoes, marble and mosaic floors. The latter even covered a quarter of the house, comprising mainly geometric patterns.

Like the other houses of the same period, a large courtyard was the core of the building, the dimensions of which are 60x60m. Numerous rooms grow symmetrically around it. Its monumental entrance was to the east, on an important street of the ancient city that connected the theatre with the amphitheatre and the port. It was decorated with pebbly flooring and was framed by two arched halls. The West and East Wing rooms functioned to cater to the daily needs of those staying here, including warehouses, service rooms and accommodation. Baths have also been located in the southeast corner of the building which were heated by a fuel-heated system. The laboratories appear to have been housed in the north wing, where waterproof floors, tanks and channels were found.

The most important wing of the building was the south, which served administrative functions while formal ceremonies appear to have taken place. In the centre of it a large hall is preserved, which ends on its south side with a semi-circular arch with a raised floor. This has been interpreted as a meeting and conference room. Here, is one of the few preserved figurative mosaics of the house, depicting the bath of the new-born Achilles. In the centre is his mother, Thetis and on her right is his father, Pileus next to whom the three fates are standing: Klotho, Lachesis and Atropos. The two young slaves preparing the infant’s bath, Ambrosia and Anatrophe, symbolize Achilles’ divine and mortal origin.

Also, on the west end of the same wing, one of the most impressive mosaic floors is preserved, from which the building was named. It depicts the scene of Theseus’ fight with the Minotaur in the Labyrinth, watched by Ariadne and two other figures, personifications of Crete and the Labyrinth, as the names next to them bear witness.

According to the interpretation of the house, according to the first excavators, the building was the House of the Roman governor of Cyprus, because of the level of luxury, the size and the monumentality of the building. This view is by far the most prevalent. However, it has recently been challenged by young scholars who believe that this villa may have been the residence of a member of the local elite rather than the governor. After all, the capital of Cyprus in the late 4th century. AD had already been transferred to Salamis. Also the monumentality and luxury of the building could be justified, since the tendency for flamboyant vibes is observed in the circles of the noble Romans of that period. Many of them even lived as ‘little emperors’, never surpassing the emperors themselves. 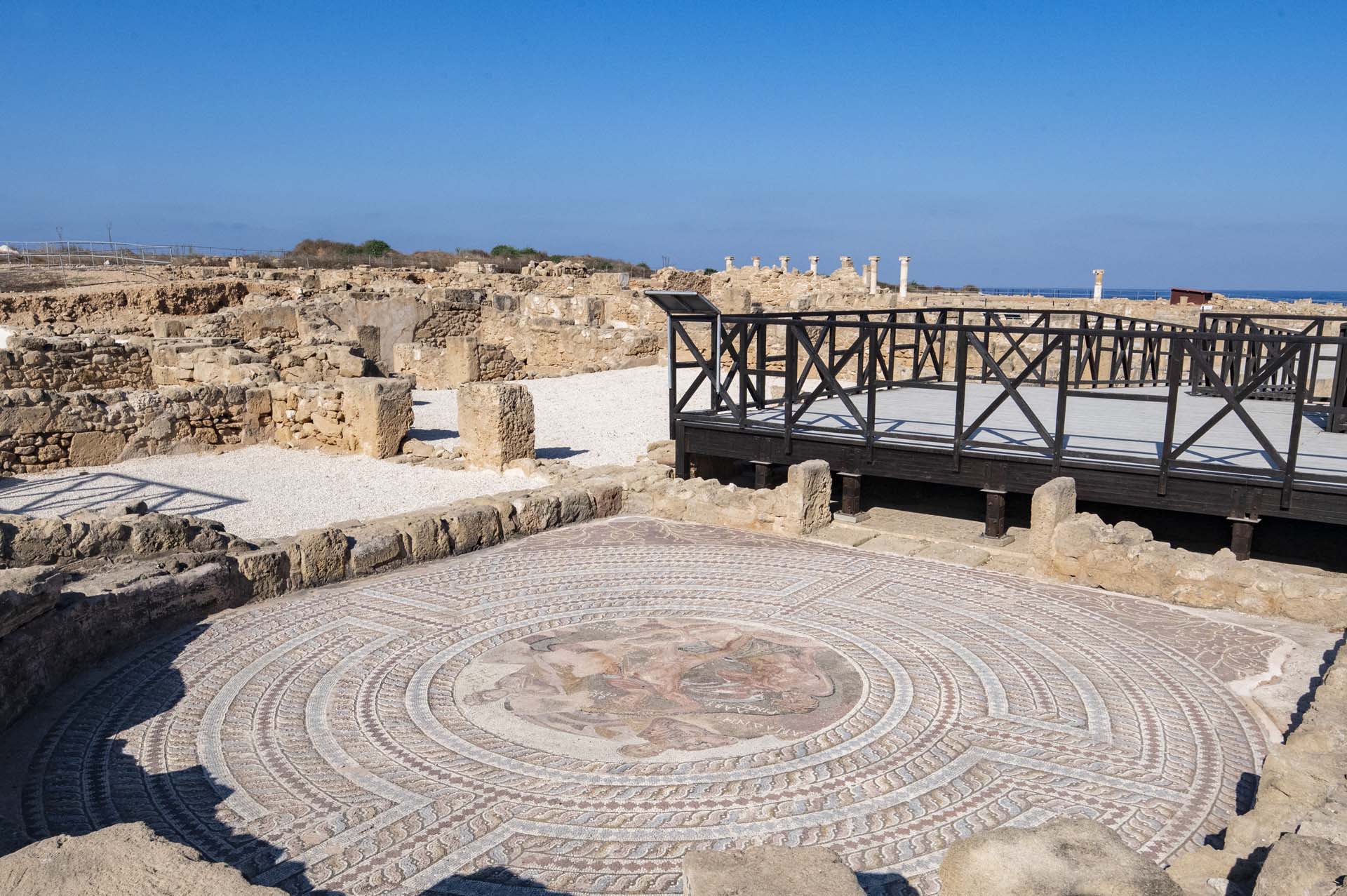 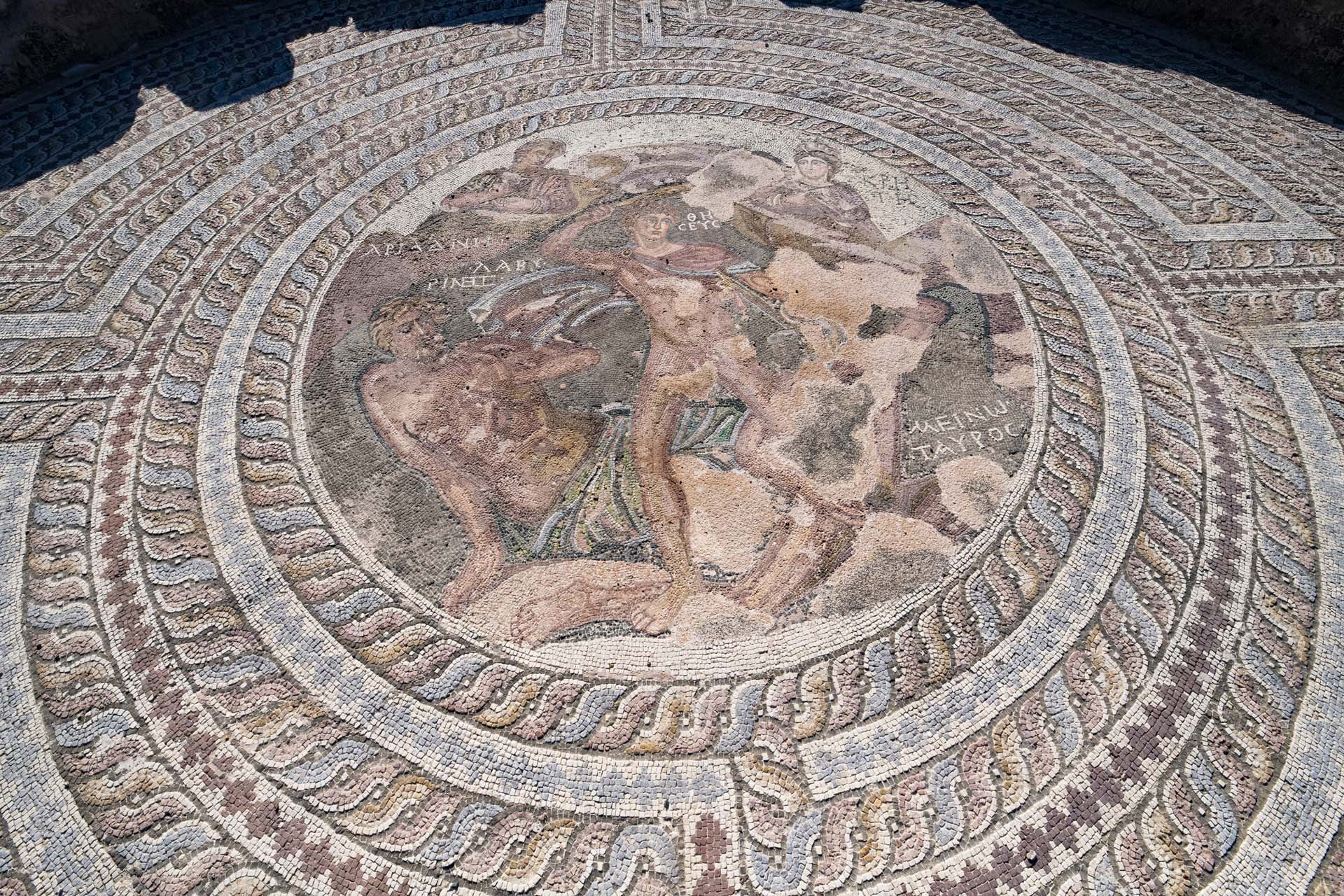